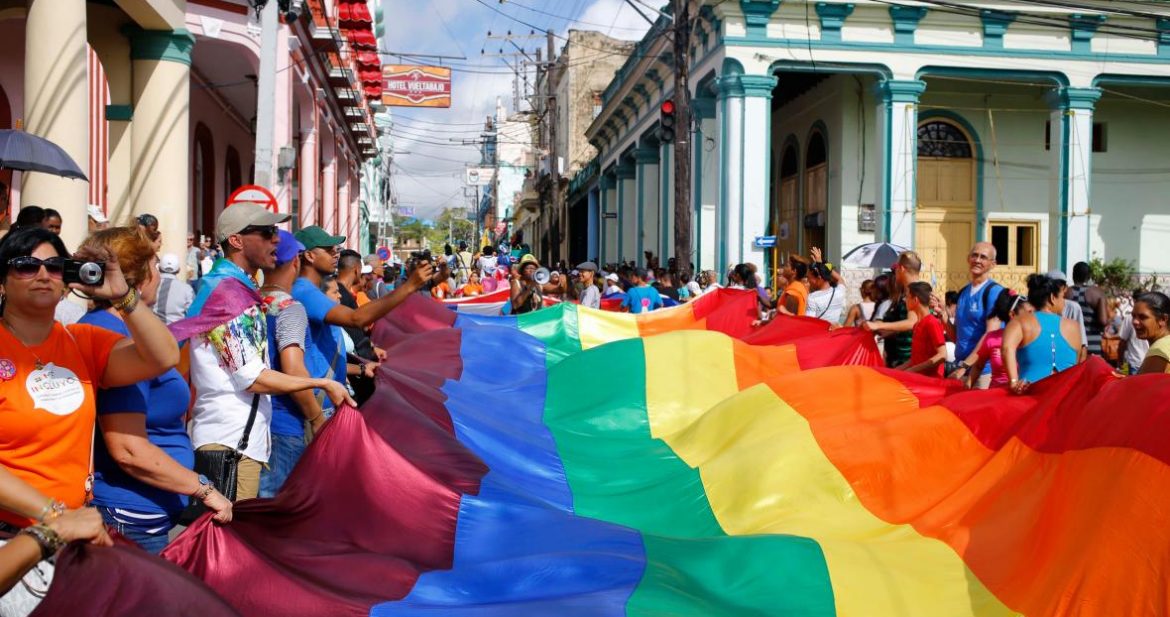 This paper divides the analysis of the Cuban government’s treatment of gays into three periods. The First Period (1965-1979) began in 1965 because this year was when the government established the UMAPs and imprisoned gays in them. The First Period ends in 1979 because this year marks a shift in the government’s treatment of gays through the government’s extension of rights to LGBTQ+ individuals by removing the recognition of homosexuality as a crime from the Cuban penal code. The Second Period (1980- 2004) ends before the beginning of the Third Period (2005-Present) because 2005 marks the year that the government introduced a bill for further extension of rights to transgendered persons, which caused individuals to consider Cuba the most liberal nation in Latin America on gender issues when the legislation was passed.

Before this paper begins with an analysis of each period, contextual information on the affairs of the gay community in the Cuban pre-Revolutionary era is provided. Ocasio, a Latin American literature historian, cites the work of Simo, a playwright and novelist, and Garcia Ramos, a poet, to argue that pre-revolutionary arts and literature in Cuba exhibited “openly or discreetly homosexual lifestyles” (2002, 92). Ocasio also cites the work of Simo and Garcia Ramos to claim that “an evident homosexual sensibility” was felt in Cuban music in the 1950s and 1960s (2002, 92).

A different perspective on the pre-revolutionary life of Cuban gays is contended by Arguelles, a former professor of Xicanx/Latinx Studies, and Rich, a scholar and critic of Latin American and queer films. Arguelles and Rich claim that the pre-revolutionary life of Cuban gays was characterized by harsh repression, derision, and violence within the family and traditional workplaces (1984, 686-687). Also, Arguelles and Rich explain that homosexual desire in the pre-revolutionary era was directed toward illegal and profitable markets, such as the “Havana underworld,” where homoerotic experiences were bought and sold (1984, 686). Arguelles and Rich note that Havana tourist businesses preferred to hire Cuban homosexuals to meet the demands of American tourists and servicemen for homoerotic experiences (1984 686-687). Arguelles and Rich also detail how employment opportunities and social pressures often caused homosexual and heterosexual Cubans alike to offer their homoerotic services to markets such as the Havana underworld, where men of the Cuban bourgeoisie would purchase homoerotic services (1984, 687). Also, it is mentioned that lesbian prostitutes would offer their services as a favor to Cuban heterosexuals (Arguelles and Rich 1984, 687). While Arguelles’ and Rich’s account of the pre-revolutionary gay Cuban lifestyle is characterized by the exploitation of homosexuals, these authors also argue that the development of profitable markets like the Havana underworld created a superficial tolerance of Cuban gays. However, the beginning of the Cuban Revolution in 1959 saw further development in the economy, which motivated the elimination of markets like the Havana underworld and led to a greater presence of homophobia in Cuban society (Arguelles and Rich 1984, 688).

The development of greater homophobia in Cuban society led toward the type of treatment of gay Cubans by the government that started the First Period. As aforementioned, this paper argues that the First Period can be mostly categorized by oppression from the government toward gay Cubans. Guerra, a professor of Cuban and Caribbean History, explains that in 1965, the UMAPs were established and individuals such as Jehovah’s Witnesses, Seventh Day Adventists, Catholic priests and mainstream Protestant preachers, artists, intellectuals and political opponents were imprisoned along with self-identified, closeted, and suspected gays (2010, 268). In these camps, gays and other individuals considered as undesirables by the Cuban government were forced to perform work on sugar lands and other labor as well until 1968 when Fidel Castro was convinced to close the camps because of the condemnations of other revolutionary figures, such as Haydee Santamaria and Carlos Franqui (Guerra 2010, 268). Although the Cuban government eventually freed the gays and other individuals from the UMAPs, the fact that the government had forced gays and other individuals into these camps to perform forced labor demonstrates an act of harsh oppression from the Cuban government toward LGBTQ+ individuals.

Afterward, Arguelles and Rich indicate that in 1971 a message from Cuba’s First National Congress demonstrates the first documented instance where homosexuality was addressed as a medical and psychological matter rather than a criminal one (1984, 693). This instance demonstrates progress toward the decriminalization of homosexuality in Cuba. However, this perspective of homosexuality as a medical and psychological matter proposed that homosexuality was a contamination, which motivated the Cuban government to attempt to reduce “infection” by withdrawing gays from education and creating schools such as the Centre for Special Education where “feminine” and “at-risk”  boys raised by single mothers were educated separately from the rest of the population (Arguelles and Rich 1984, 693; Guerra 2010, 274). The Cuban government’s promotion of the view of homosexuality as a contamination, followed by the government’s removal of gays from schools and the creation of schools where boys who were supposedly vulnerable for “infection” were forced to study exhibits further acts of oppression from the Cuban government toward LGBTQ+ individuals.

In 1971 as well, a law was made that prevented gays from working in jobs where they could impact youth and in 1974, another law proclaimed that “public ostentation” of homosexuality was offensive (Guerra 2010, 269). As Maher, an Assistant Dean for Professional Education, indicates, it was not until 1979 that the Cuban government removed its recognition of homosexuality as a crime from the Cuban penal code, yet an individual could still go to prison for three to nine months for exhibiting homosexual activity in public (2007, 5). While the Cuban government’s official decriminalization of homosexuality from the penal code represents an extension of rights toward gays, the 1971 and 1974 laws taken together with the continued imprisonment of individuals based on homosexual behavior, the imprisonment of homosexuals in the UMAPs, the forced withdrawal of gays from education, and the separation of “effeminate” and “at-risk” boys from regular schools into schools such as the Centre for Special Education strongly highlight that the First Period can be characterized by harsh oppression from the government toward LGBTQ+ Cubans.

As Cuba transitioned into the Second Period, the homophobia possessed by the government led to more acts of oppression toward LGBTQ+ individuals, but the government also extended more rights to gays. Pena, the Director of the School of Cultural and Critical Studies at Bowling Green State University, uses information collected from interviews she conducted to describe gays’ experiences and the Cuban government’s treatment toward gays in 1980 during the Mariel boatlift, which was a mass emigration of Cubans to the US that was organized partly by the government. During the Mariel boatlift, Cuban gays desiring to leave Cuba willingly portrayed stereotypical homosexual forms of expression toward Cuban officials who decided who was allowed to leave the country (Pena 2007, 482). Cuban gays did this because they knew the government was prioritizing emigration opportunities to gays and other unwanted members of society to “improve” the reputation of Cuba and eliminate opposition from these undesirable individuals (Pena 2007, 483, 490). Although the government’s homophobic perspective helped facilitate emigration for gays who wanted to leave Cuba, the fact that the government expedited the emigration of gays to “elevate” the image of Cuba and diminish resistance toward the government indicates an act of oppression from the government toward LGBTQ+ individuals.

When Arguelles and Rich were researching in Cuba in 1984, they noted that Cuba was undergoing a housing crisis (696). As a result of this housing crisis, individuals sought to obtain privacy for sexual activities by paying by the hour for rooms in posadas, or inns (Arguelles and Rich 1984, 696). Unless LGBTQ+ individuals looking to rent a room in a posada had good connections, they were often denied a room due to homophobia and entry to posadas, like with hotels and restaurants, depended on the manager’s understanding of government policy on admitting gays (Arguelles and Rich 1984, 687). Also, although homosexuality was decriminalized from the Cuban penal code, Cuban law still considered the expression of homosexuality as “improper conduct,” which led to police street-sweeps of gays before big public events throughout the 1980s and 1990s (Maher 2007, 5). Overall, the Cuban government’s maintenance of laws that could be interpreted to deny gays admission to public spaces, the government’s legal establishment of homosexual expression as “improper,” and the street sweeps of gays by police illustrate continued instances of oppression from the government toward gays.

Moreover, as Cuba transitioned into the Third Period, it is argued that while the government continued to oppress homosexuals, the government also further extended rights to Cuban gays. In 2005, the Cuban National Center for Sex Education (CENESEX), which works to aid with “the development of a culture of sexuality that is full, pleasurable and responsible, as well as to promote the full exercise of sexual rights,”  introduced a draft bill to the Cuban parliament that was passed in 2008 and permits transgendered persons free sex reassignment surgery, hormone replacement therapy, and new legal identification documents (Majied 2015, 32). The Cuban government’s establishment of this legislation highlights how the government has progressively extended more rights to LGBTQ+ individuals in this period.

Also, Stout, a cultural anthropologist, reports that in 2007, public gatherings of queer persons had still been disrupted by police (2011). Also, Stout reports that in 2008 the Cuban delegation of the United Nations approved protections against killings motivated by sexual orientation, but in 2010, the Cuban delegation voted in favor of altering language from these protections that explicitly condemned killings motivated by sexual orientation to condemning killings for “discriminatory reasons” (2011). Although the change in wording in the UN protections to instead condemn killings for “discriminatory reasons” can be viewed favorably because it can be interpreted to more broadly condemn discriminatory killings of any kind, the Cuban delegation’s support for the removal of language that was specifically against killings based on sexual identity, along with the Cuban police’s continued harassment of gays, indicate instances of continued oppression from the government toward LGBTQ+ individuals.

In 2014, the National Assembly of People’s Power, the legislative body of Cuba, updated its Labor Code and prohibited job discrimination based on sexual orientation (Asamblea Nacional del Poder Popular). Also, in 2019, the National Assembly of People’s Power amended the Cuban Constitution, which now states that a Cuban of any sexual orientation is viewed as equal to anyone under the law and is granted the same treatment, protections, rights, and liberties as anyone else (Asamblea Nacional del Poder Popular). Overall, primary source documents such as the 2014 Cuban Labor Code and the 2019 Cuban Constitution, along with the transgender policies passed in 2008 help support that this period can be characterized by an even greater extension of rights by the government toward LGBTQ+ persons. However, the police’s disturbances of gay gatherings and the UN Cuban delegation’s decision demonstrate how this period continues to witness oppression from the government toward gays.

Ultimately, as the evidence from the sources provided has supported, the Cuban government’s treatment of homosexuals has changed over time from the First Period, when the most oppression occurred, into the Second Period, when oppression continued, but more rights were gradually extended, and into the Third Period, when instances of oppression persist, but even more rights have been granted to gays. This research is significant because it provides a more comprehensive account of the Cuban government’s treatment of gays since the Revolution. Also, this research is important because it helps demonstrate common instances in Cuban history where the government has sought to consolidate strict control over its people. Just as significant, this research can help demonstrate how Latin American concepts of machismo perpetuated homophobia in the Cuban government.

Arguelles, Lourdes, and B. Ruby Rich. 1984. “Homosexuality, Homophobia, and Revolution: Notes toward an Understanding of the Cuban Lesbian and Gay Male Experience, Part I.” Signs 9(4): 683–99.

Majied, Kamilah F. 2015. “Racism and Homophobia in Cuba: A Historical and Contemporary Overview.” Journal of Human Behavior in the Social Environment 25(1): 26–34.

Sole, Maria Elena. 1967. Photo taken by the team of psychologists during a session of hormone therapy administered to homosexuals in UMAP. https://translatingcuba.com/academies-to-produce-macho-men-in-cuba-abel-sierra-madero/ (April 17, 2020).